A selfie with ETA

A selfie with ETA 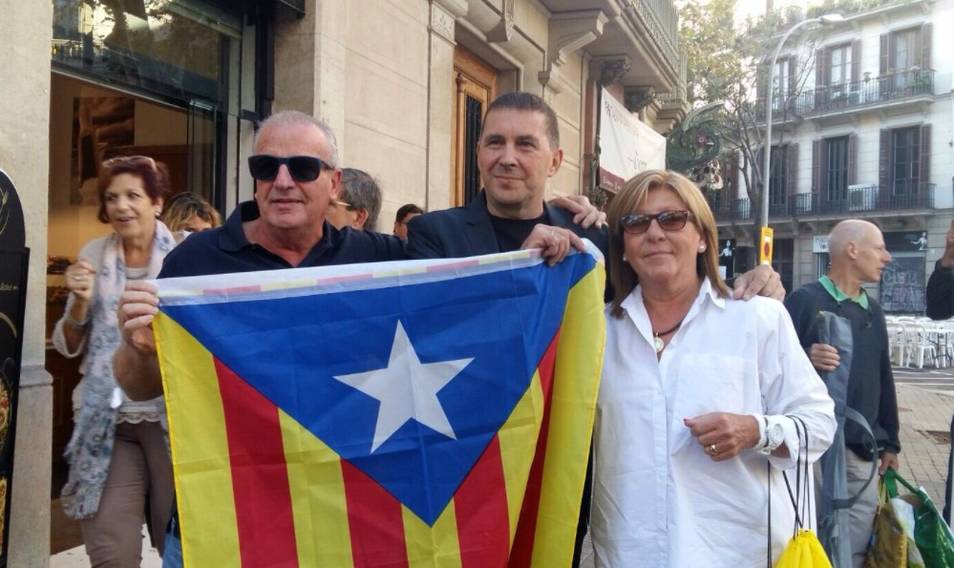 What do they like about Otegi? I am asking those who during the separatist demonstrations on the day of “Diada” approached him smiling to have a selfie taken with the former leader of ETA whom is still unrepentant of the crimes of this terrorist organization. Moreover, as Secretary-General of Sortu, he is there, in the separatist demonstration, for being this: an unrepentant terrorist. He would not be the chief of the successors of ETA if he had rejected or declared repulsive this criminal legacy. Therefore, I am asking those dazzled with the guest of honour to the separatist show what it is that they find so admirable in him. Perhaps his membership in ETA during its bloodiest years? His lack of condemnation, repentance or help to solve the over 300 assassination cases still pending for justice?

The admiration shown for Otegi was not exclusive to those that could find an excuse in their young age and ignorance. There were grey-haired people amongst the ones shaking his hand and having a selfie with him. Indeed, it is possible that some people may be delighted to have their picture taken with a celebrity no matter who, and that this fascination for the celebrity takes them to lose face for having a photograph with a serial killer that has been on the telly. I am considering. I do not rule out such stupidity in this case.

I wonder if the enchantment with Otegi comes from his background amongst ETA gunmen or from the laundering of this background that he himself, his people and others have been doing. A laundering that goes as far as presenting Otegi as a providential man that put a stop to that killing machine. They are not just whitening his past, they are sanctifying him.

The selfies with him requires a psychological study, but him being invited by the organizers must be understood as a political act. This was a sign of friendship and complicity with the successors of the terrorist organization. I do not know if it was deliberate, it looks like it: this has coincided with the 30th anniversary of the Hipercor attack, the biggest slaughter in ETA’s history. Twenty-six people dead and forty-six injured. It was the 19th of June 1987 in Barcelona. They placed 27 Kilograms of ammonal and 200 litres of flammable liquids. The Spanish Audiencia Nacional explained it like this:

A ball of fire burnt everyone in its path and at the same time created a large amount of toxic gases that asphyxiated those in the vicinity. Several people were atrociously burnt and mutilated and had no possibility of escaping the black smoke and flammable materials adhered to their bodies as the composition of the explosives was such that made these materials impossible to peel off and to extinguish them as their auto-combustion did not require from the atmospheric oxygen.

At that time, Otegi had been in the terrorist organization for about ten years. Otegi joined ETA when Franco’s dictatorship was almost finished. He belongs to those that developed their criminal careers against democracy. Moreover, the overwhelming majority of the attacks and assassinations of ETA took place while in a democratic regime.

This year 2017, the one of the 30th anniversary of the slaughter in Hipercor, Otegi wrote on twitter that he shared “the pain of the victims” and that “it should have never occurred”. Perhaps this was to prepare his landing in the demonstration of the “Diada”. He did not write for example: “We should never have put that car-bomb nor any other”.

“It should never have occurred”. There is no subject. No one is responsible. Nothing new either can be found in Otegi’s so-called condolences. After the attack in Hipercor, ETA sent a press statement saying that they had made “a serious error” and this was followed by another one from Herri Batasuna where they lamented “the high price in human lives and injured people that this tragic accident had generated”. Accident. They use the word accident because the warning call, that gave a wrong time for the explosion, was not followed by the evacuation of the supermarket, and hence they make responsible the company and the police.

The shock caused by this slaughter forced ETA, and its political wing, to that unheard of and brief self-criticism. It was so brief though, that six months later they committed another slaughter. A car-bomb killed eleven people, six of them under-aged in a home barrack of the Guardia Civil in Zaragoza. Needless to say, neither ETA nor its political wing lamented the cost in human lives of those attacks nor any of the ones that killed army personal, policemen, civil guards, including their relatives, those unfortunate bystanders and so many others.

TV3 with fine judgment to select its guests made the most of the presence in Barcelona of such a prominent actor in this terror history to interview him. Those involved in this program mentioned in social networks that they had had a great time with him. A friendly chap with whom to have a laugh and take some selfies. When they took their photographs with him the Catalan separatists have photographed themselves. Not a very flattering photography.

Following Batasuna’s press release regarding the “accident” of Hipercor, La Vanguardia editorialised: “The press release that we all have had to read exceeds outrage and causes us something deeper: disgust”. Old hat. Nowadays, Otegi can walk like a rock star in Barcelona, the same place as that and other slaughters. Not even the fact that terrorism, in its jihadist form, had just used its scythe in this city made his hosts and admirers ask him about his past. A past, and this is the key point, that is still part of his present.

2 respuestas a A selfie with ETA